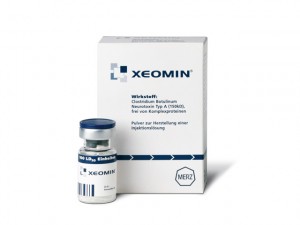 Launched in the UK in 2008, Xeomin® is the third botulinum toxin type A to be promoted in the UK. Xeomin® claims to be an innovative Botulinum type A formulation, in which the complexing proteins have been removed by an extensive purification process from the botulinum toxin complex. In contrast to the other commercially available preparations, Xeomin® contains the pure 150 kD neurotoxin.

It is widely accepted that the bacterial protein present in other products play a role as promoters of an immune reaction, resulting in a loss of effect and reduction in duration of activity. Studies show that Xeomin®, without the complexing proteins, has the lowest content of protein of all of the available botulinum toxins and furthermore show that repeated application of Xeomin®, even in high doses, does not induce the formation of neutralising anti-bodies.

This means that Xeomin® is able to provide similar results to those achievable with the other products without the risk of antibody formation, providing continual long lasting effects. This could be relevant when large doses are being used for medical indications, but many industry experts questions the relevance when this product is used for cosmetic purposes.

How is it manufactured?

Xeomin is made from purified type – A neurotoxin produced by the bacteria Clostridium botulinum with complexing proteins removed through purification.

How does it work?

It temporarily prevents the release of acetycholine from sympathetic nerve terminals.

Who can perform Xeomin® treatments?

It should be used by trained members of the medical profession only.

Xeomin® is licenced in the UK for blepharospasm and cervical dystonia.

Who should not have Xeomin® treatment?

Reported side effects associated with the cosmetic use of Xeomin® include bruising or bleeding at the site of injection, headache, and rarely eyelid ptosis or diplopia, and brow droop.

Most clinics and practitioners charge by area of the face treated. These areas are usually defined as crow’s feet, forehead lines, and glabellar lines (frown lines between the eyes).

Most of the literature on Botulinum Toxin, and hence the clinical evidence and statistics, are based on Botox® as this brand represents around 80% of the world’s use of Botulinum Toxin.

Clinical studies have suggested that Xeomin® is similar in its effect to Botox®. 1 unit of Xeomin® is equal to 1 unit of Botox®

For further information concerning any of our treatments, the products we use, or to find out about prices and availability please call us on 0845 833 or contact us via our web form and let us call you back.